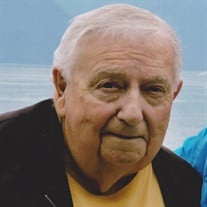 Virgil M. Shagena, age 84, of Deckerville, passed away Tuesday March 15, 2016 in Covenant-Cooper Hospital, Saginaw. He was born November 11, 1931 in Argyle Township, MI, the son of the late Marshall and Elsie (Franzel) Shagena. He married Anna K. Licht on July 4, 1953 in Detroit. She preceded him in death on March 8, 2006. Virgil was a Veteran of the Korean Conflict, serving in the US Army. He worked for the Deckerville Community Schools as the Transportation Supervisor for many years. He enjoyed playing cards, going to the movies and being with his family. Survived by his loving partner Jane Vogel of Deckerville, four sons, Dennis (Marjorie) Shagena of Clinton Township, David (Mary Beth) Shagena of CO, Daniel (Erin) Shagena of NH, and Doug (Suzanne) Shagena of Deckerville, two daughters, Debra (Charles) Stefani of Clinton Township and Denise (Ken) Smith of NV, fifteen grandchildren and sixteen great grandchildren, two sisters Mrs. Virginia Schott of Marysville and Mrs. Maxine (William) Green of Sandusky, and several nieces and nephews. He was preceded in death by one brother Curtis Shagena, and one sister Mrs. Thelma Goheen. A Funeral Mass to celebrate the life of Virgil M. Shagena will be 11:00 AM., Saturday March 19, 2016 in St. Patrick’s Catholic Church/St. Isidore Parish, Palms. Visitation 2:00-8:00 Pm., Friday in Apsey Funeral Home, Deckerville and 10:00 AM., until the time of service at church on Saturday. Burial will be in Downing Cemetery. Mr. Shagena’s pallbearers will be Nicholas Shagena, Nathaniel Shagena, Michael Rutkowski, Michael Peters, Kenneth Smith, Kenneth Young, and honorary pallbearers will be Bryan Shagena and Benjamin Shagena. Memorials may be given to the Sanilac Veterans Assoc. Condolences may be sent on line to apseyfuneralhome.net

The family of Virgil M. Shagena created this Life Tributes page to make it easy to share your memories.

Send flowers to the Shagena family.