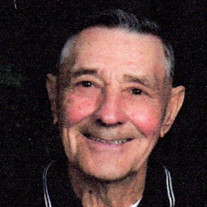 Wayne Lewis Nichol age 94, formerly of Deckerville, died April 3, 2017 in Zephyrhills, Florida. Wayne was born in rural Sanilac County on August 18, 1922 to Amarilla (Wagg) and Frank Nichol, the third of five children. He was delivered by a doctor making house calls who mistakenly recorded his legal birth date as August 16 allowing him to celebrate twice each year. While growing up, the family moved to different farms in the area which forced him to board with other families to finish school. In 1941 Wayne graduated from Deckerville High School. After graduation he joined the Merchant Marines and was sent to Baltimore to attend marine engineering school. While in Baltimore, he met a beautiful, young, woman Madalyn Holin. However, plans quickly changed with the bombing at Pearl Harbor and he was called up to serve in the US Navy out of San Francisco. He qualified for submarine duty, but chose instead to serve in the Armed Guard. The Navy placed personnel as gun crews aboard civilian merchant and Liberty ships helping to protect the transport of cargo and troops around the Pacific. He survived hurricanes and torpedo attacks. After the war, Wayne returned to Baltimore and rekindled his relationship with Madalyn. They were married in March 1946 in Baltimore. The couple moved to Michigan to begin their new life together which spanned 71 years. Wayne started working for the Grand Trunk Railroad and then later tried farming, but found his calling in life was home construction which he did for the remainder of his days. He semi-retired in 1990 when the couple moved to Florida. He was also very active in sports volunteering to help coach and run the local little league program, umpire high school baseball and community softball games, run the clock at football and basketball games, and whatever came up when there was a need. He never said no. His real passion was family. He and Madalyn raised two daughters Kathleen (Bradley) Root and Robin (Douglas) Apsey. He was extremely proud of his grandchildren Brian Root, Karen Corsetti, Christian (Andrea) Apsey and Erin Apsey and great grandchildren Dane Marasco, Matthew Corsetti, Jessica Dinan, Nicholas Root, Benjamin Root and Allison Apsey. Wayne is also survived by many nieces, nephews, cousins, and three exchange students he helped mentor, Hanne, Roula, and Liliana, all a proud part of his extended family. He was preceded in death by his parents and four siblings, Cecil (Doc) Nichol, Beryl Davis, Genevieve Tanton and Harlem Nichol. A memorial service to celebrate the life of Wayne L. Nichol will be held Saturday September 9, 2017 at Noon in the Apsey Funeral Home. Pastor Henry Hales will officiate. Burial will be in Downing Cemetery. Visitation will be from 11:00 AM., until the time of the service. Memorials may be given to St. John’s Lutheran Church, Palms, MI or Shepherd of the Hills Lutheran Church, Dade City, FL.

Wayne Lewis Nichol age 94, formerly of Deckerville, died April 3, 2017 in Zephyrhills, Florida. Wayne was born in rural Sanilac County on August 18, 1922 to Amarilla (Wagg) and Frank Nichol, the third of five children. He was delivered by... View Obituary & Service Information

The family of Wayne L. Nichol created this Life Tributes page to make it easy to share your memories.