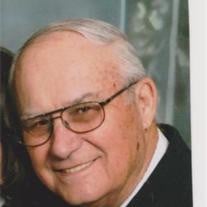 Jack Morris, age 80, of Sandusky, died Tuesday August 7, 2012 in Mercy Medical Center, Canton, OH. He was born April 13, 1932 in Custer Township, the son of the late Orville and Vera (Hardy) Morris. Jack married Sue Smith on December 21, 1985 in Sandusky. He was a very Godly man, a member of Paradise Chapel in Carlsbad, NM., he enjoyed bowling, golf, minibikes and four wheelers, western movies and anything with a western theme. He and his wife Sue enjoyed traveling together having been in 48 states. Jack was a graduate of Sandusky High School. He worked at Yale Rubber for 40 years, along with farming, driving a school bus, and a milk truck. Jack is survived by his wife, Sue of Sandusky, two sons, James Morris of Ind., John (Jody) Morris of Sandusky, one daughter Julie (Mike) Lee of NM., seven grandchildren, and fourteen great grandchildren, three sisters, Marlene (Larry) Manzer of Spring Lake, Janet and Bob Teela, IL., Shirrell Jeremiah of OH., and several nieces and nephews. He was preceded in death by one brother Dale and a daughter-in-law Mary Morris. Funeral services to celebrate the life of Jack Morris will be 2:00 PM., Sunday in the Sandusky Baptist Church. Family members will officiate. Burial will be in Downing Cemetery. Visitation will be from 5:00 PM to 8:00 PM. Saturday in the Apsey Funeral Home. Memorials may be given to Paradise Academy, Carlsbad, MN. Condolences may be sent to http://apseyfuneralhome.net/

The family of Jack Morris created this Life Tributes page to make it easy to share your memories.

Send flowers to the Morris family.